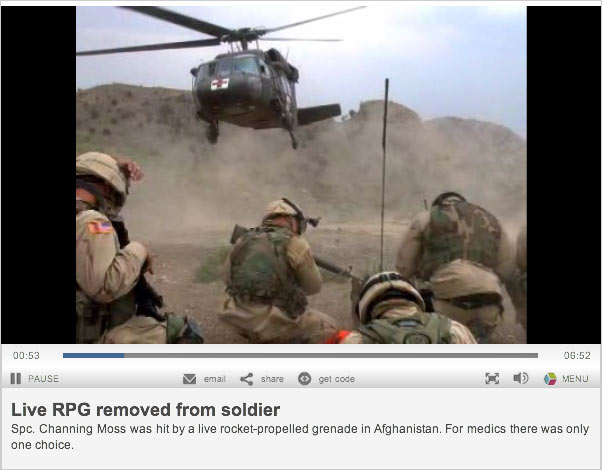 UPDATE: The original video we were linking to, illustrated above with a frame-grab from the footage, was on the Military Times multimedia video web page. It has since been pulled down, but we found it here, on YouTube. It’s a bit graphic, there’s some raw language, there is certainly some raw emotion, but it is an absolutely amazing piece of reportage that chronicled a soldier’s journey after being hit by an RPG while riding in a Humvee while on patrol in Afghanistan. It’s 6:46 minutes long, and worth watching every second: Live RPG Removed from soldier.

Army protocol dictates that Specialist Channing Moss, who as the soldier struck by the rocket-propelled grenade, be isolated in an area where he would be forced to either wait to die from his wounds, or be killed by an explosion from the RPG that had impaled him and which was still inside him. Army protocol states that Medivac choppers are never to carry anyone with a live round in him. But the flight crew flew him to the nearest aid station anyway. Army protocol states that a patient like Specialist Moss is to be put in a sandbagged area away from the surgical unit, given a shot of morphine and left to wait until others are treated. The medical team ignored the protocol.

The video includes some actual footage of the surgery where Dr. John Oh, a Korean immigrant who became a naturalized citizen and went to West Point, removed the round with the help of volunteers and a member of the Explosive Ordinance Disposal team. It’s a remarkable story about the people who got involved at great risk to their own safety and lives to help a fellow soldier: Live RPG Removed From Soldier.